Skrúður, Or The Botanical Garden In The Middle Of Nowhere

I will be continuing my little series of translations of my brilliant friend Sofia's lovely Italian articles on the Westfjords and things we experienced there. Today's topic is a lovely little garden called Skruður, which is located on the property of Núpur, the school where we were studying.

Here is a link to the original, complete with her incredible photographic skills. Let's begin.

Skruður, the little botanical garden in the middle of nowhere: The story of a garden that survives on the edge of the Arctic Circle

There's not much on the banks of Dýrafjörður, one of western Iceland's many deep fjords. Some farms, some bare mountains with permanently snowy peaks, a road that runs along the coast, a church, and an old school. The earth is dark and barren, flocks of sheep graze freely between streams, and the north wind doesn't allow the vegetation to grow very tall. "If you get lost in a forest in Iceland, you just have to stand up." With caustic Nordic irony, this joke reflects the arboreal reality of the island. In fact, only about two percent of its territory is covered with trees. But it hasn't always been like this. When the first Norwegians arrived by sea in the distant year 874, birch forests covered almost forty percent of the island. Over the centuries, the trees were slowly felled to build ships and houses and to make way for pastures. Only in the last fifty years has this trend been reversed, thanks to political pressures for reforestation. However, it is still strange to observe green stains in Iceland's almost desert-like desolation, and for this reason the little oasis of Skruður shocks even more.

Enclosed in a little wall of stone and at the slopes of a steep, icy incline, Skruður is a little botanical garden, founded in 1909 by Sigtryggur Guðlaugsson, a Protestant pastor and teacher in the nearby boarding school of Núpur. The purpose of the garden was to educate the students of the school, teach them how to work the land, to take care of plants, and be able to recognize them. It was so that, slowly, Sigtryggur and his students erected an enclosure, removed the stones, dug the ground, and planted trees that still flourish today. While there is frozen gravel all around, one enters in the garden and is surrounded by colorful flowerbeds and fruit trees.

In the center of the greenery lies a little greenhouse, a glass refuge capable of capturing the little warmth that arrives from the Arctic sun. This hidden corner of agriculture ripped from the barren landscape was awarded the Carlo Scarpa International Prize in 2013, an important recognition in the world of landscape architecture. The jury commented this on the motivation for their awarding of the prize:

"Skruður is a fortress and a crucible unto itself: its enclosure describes a condition that searches for a point of contact between two worlds, that of the confidence and the trust of cultivating the earth, and that of the conscious gaze on the vastness of locations that accompany the same human experience."

Passing the entrance gate into the garden is, in fact, an unparalleled architectural experience. It's hard to feel the place's uniqueness at first, because the presence of fertile land and green fronds above is easily taken for granted. Slowly, however, one catches on to the powerful gesture made by the young students of these valleys a century ago: to snatch up a little strip of silent, deserted land, and render it human, transforming a minute enclosure into a place of learning and memory.

The Icelandic poet Guðmundur Ingi Kristjánsson described the garden like this in 1938:

"Skrúður is a smiling mark
that deserves to be seen
which shows how mild and powerful
the earth of your land can be."

Those who admire Skrúður really do, in fact, "know the creative wish to cultivate." An activity so ancient and so human that it can only be fully appreciated on the edge of the Arctic. Those who admire and walk along this garden in the middle of nowhere understand the incredible size of the work hidden behind every flower, and are moved by the observation of the eternal showdown between humanity and nature, which in this point, even for just a few square meters, finds harmony.

Thank you all for reading. 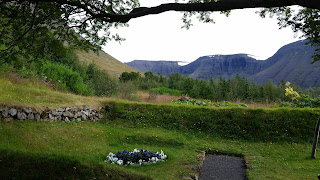 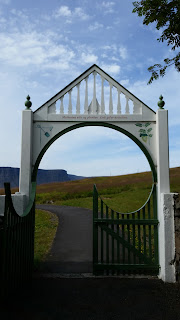 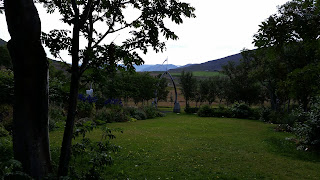 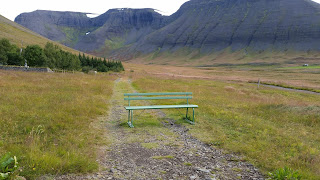 (Here are a few of my own shots of Skruður!) 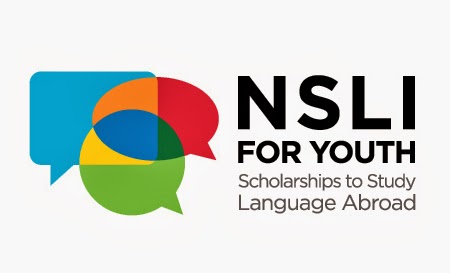 Nico Borbely
Various stints of this blog: "A Year in the Mother of the World," during my 2012-2013 AFS year program in Alexandria, Egypt. "Good Dil," for my 2014 NSLI-Y Turkish summer program in Bursa, Turkey. "Eldur og ís(land), meaning "Fire and ice(land), during my first summer program in Iceland at the University Center of the Westfjords in 2016. "AzerbayCANIM," for my CLS Turkish program in the summer of 2017. "Russian to Finnish," during my junior year of college abroad in Moscow, Russia, and Turku, Finland. "Nico and the world," intermittently. And now "Thoughts and Words," after one of my favorite Italian songs, "Pensieri e parole" by Lucio Battisti.